The Inspire 1 was a revelation. The first filmmaking drone in the world to integrate an HD video transmission system, 360° rotating gimbal and a 4K camera, as well as the simplicity of app control. The launches of the Zenmuse X5 and X5R cameras further cemented the Inspire as a critical tool for filmmakers around the globe.

The Inspire 2 takes everything that was good about the Inspire 1 and improves it. The image processing system CineCore2.0 has been upgraded to CineCore2.1, recording video at up to 6K in CinemaDNG/RAW and 5.2K in Apple ProRes when used with Zenmuse X7 camera. It goes from 0 to 50 mph (80 kph) in just 5 seconds and hits a maximum speed of 58 mph (94 kph) and has a max descent speed of 9m/s for unheard of speed and agility in an aircraft this size. A dual battery system prolongs the flight time to a maximum of 27 minutes, while self-heating technology allows it to fly even in low temperatures. FlightAutonomy has been revised and developed specifically for the Inspire 2, providing two directions of obstacle avoidance and sensor redundancy. Increased intelligence adds multiple intelligent flight modes, including Spotlight Pro, giving even single pilots the ability to create complex, dramatic shots. An upgraded video transmission system is now capable of dual signal frequency and dual channel, streaming video from an onboard FPV camera and the main camera simultaneously, for better pilot and camera operator collaboration.

CinemaDNG and AppleProRes require a CINESSD as they cannot be recorded onto the micro SD card
DNG 20 fps continuous burst 24 MP photos requires a CINESSD, without one the maximum burst in DNG format would be 10 fps which would instead be saved onto the SD card

What size CINESSD Should I get?
If you are planning to record in 5.2k/6k RAW 30 FPS (CinemaDNG) or 4K RAW 60 FPS you will need a 480GB CINESSD as these high resolution and high FPS modes are not supported on the 240GB and 120GB versions. If you are not planning on this, the largest you can afford would be best.
The amount of video footage you can store is very dependant on the quality and framerate. On the low end you could store roughly 18 mins of 4k Apple ProRes on a 120GB CINESSD or 70 mins on a 480GB CINESSD. On the high end you could store 14 mins of 6k 30 FPS CinemaDNG on a 480GB CINESSD.

The video below compares the performance of ProRes and CinemaDNG


Material and Design
The grey magnalium (aluminium alloy) shell of the Inspire 2 is more elegant than the previous plastic shell and adds higher strength and lighter weight.
T junction airframe connections are now made of carbon fibre for visual refinement and lighter weight.
Vision sensing, 2 axis FPV camera.
Integrated into the Inspire 2 is the brand new CineCore 2.0 image processing system, capable of recording 5.2K resolution videos in CinemaDNG. CineCore 2.0 is built into the aircraft nose and works with any camera connected through the dedicated gimbal port (Currently compatible with X4S, X5S and X7).
Supports 16:9 60FPS at 4K resolution and 30FPS at 5.2k resolution (5280*2972)

Broadcast mode
Broadcasters can broadcast direct from the Inspire 2 using its dedicated 1080i50 and 720p60 transmission signal. Aerial live-streaming direct to TV is as simple as connecting the Inspire 2 remote controller to the satellite truck.

Remote Controller
Lightbridge Technology: signal frequency between 2.4GHz and 5.8 GHz capable of delivering 1080p and 720p video as well as the FPV view to pilot and camera operator.
Controllable range: up to 7 KM (4.3 miles)
Multiple slave controllers supported.
The controller has an Extension port, HDMI port and USB port.
A new wireless HD image transmission technology sends video information from the master controller to the slave controller and the two controllers can be up to 100m apart without loss of image quality. 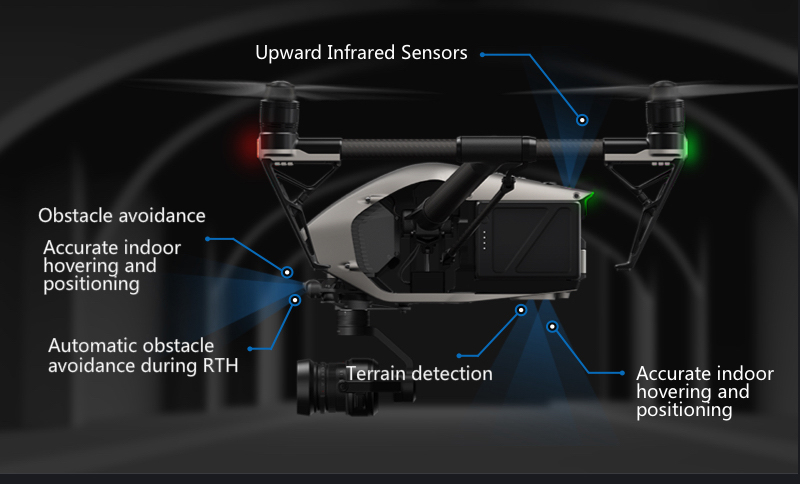 Forward and downward vision systems allow the Inspire 2 to detect obstacles up to 30 metres ahead, allowing for protected flight at up to 34mph (54kph) at a controllable attitude angle of 25°. Upward facing infrared sensors scan obstacles 16ft (5m) above, adding protection when flying in enclosed spaces. Obstacle sensing systems are active during normal flight, RTH and all Intelligent Flight Modes. These sensors are core components of the DJI FlightAutonomy system.
Smart Return to Home
Forward and downward vision systems allow the Inspire 2 to create a real-time map of its flight route as it flies. If the video transmission system signal is lost and Smart Return Home is enabled, it is able to fly home along its original route, and change to a straight line when it regains a signal. As it returns, it will use the primary camera to identify obstacles as far as 200m in front, allowing it to plan a safe route home. It is also able to reconnect more quickly after losing connection.
Increased Reliability
Reliability has been further enhanced through dual redundancy of key modules such as the IMU and barometer. The intelligent flight control system monitors the redundancy system, giving it accurate flight data.
Dual batteries mean that if a problem occurs on one battery the other is able to continue flight long enough for a safe landing
This propulsion system has been tested for thousands of hours to ensure reliability, when combined with key sensors and a dual-battery design, overall flight reliability is significantly enhanced.
Dual-signal electronic speed control (ESC) bring an extra layer of redundancy to the Inspire 2. In normal use, ESC commands are sent using PWM signals. If this is lost, however, commands will be sent through the serial port. The ESC also inherits the Inspire 1’s advanced patented algorithms, offering functional and propulsion redundancy. Combined together, these systems significantly increase the Inspire 2’s reliability.

Battery performance
A dual battery system prolongs the flight time to a maximum of 27 minutes, while self-heating technology allows it to fly even in low temperatures.
The battery’s capacity is 4280 mAh.

Spotlight Pro
Spotlight Pro is a powerful tracking mode that allows even single pilots to capture complex, dramatic images. It uses advanced visual tracking algorithms to lock onto a subject during flight, regardless of the direction that the Inspire 2 flies, creating shots that would once have required a dedicated camera operator. If the gimbal comes close to reaching its rotation limits, the Inspire 2 itself will rotate in the same direction without affecting flight control or the shot being captured to free up gimbal movement.
It has two shooting modes, Quick Mode and Composition Mode. In Quick Mode, select an object to begin tracking. In Composition Mode, select the subject and the tracking position. When the subject enters the preset tracking position, press the shortcut to begin tracking. The gimbal can be moved during shooting for composition adjustments.Spotlight Pro is available in all Intelligent Flight Modes including ActiveTrack, TapFly, Waypoint and Point of Interest. 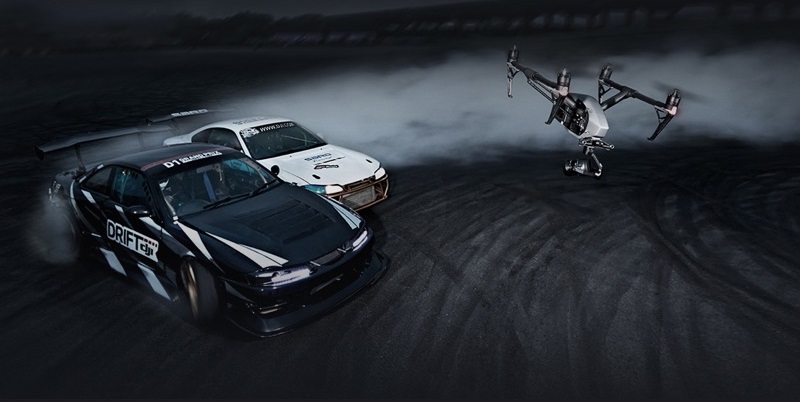 A new propulsion system optimized for power creates a new level of flight performance. The Inspire 2 flies at up to 58mph (94kph), descends at 9m/s and climbs at 6m/s. It can accelerate from 0 to 50mph (80kph) in just 5 seconds and flies at a max attitude angle of 40°. The two controller sticks are tuned for more sensitivity, making delicate manoeuvres easier.
More power also allows the Inspire 2 to fly in more extreme conditions, including over 2500-5000m above sea level (using optional dedicated propellers), and in temperatures as low as -20°C (4°F) using self-heating Intelligent Flight Batteries.

Mobile Apps
DJI GO 4 is a powerful, convenient app that offers full control and customization of the Inspire 2. It can be used to check the flight status of the aircraft in real time, trigger automatic take off or Return to Home, control camera settings, enable Intelligent Flight Modes and much more, all with just a few taps of the screen.
Transportation made easy!
A transforming structure and dual battery design make the Inspire 2 easy to travel with. Simply press the Power Button five times and the system will cut power to the gimbal. Once the camera is removed, the aircraft will automatically enter Travel Mode. Simply place the aircraft in its carrying case and it is ready to go. To move back into Landing Mode, press the Power Button five times and the landing gear will extend.